Why QUATERBACK produces such awesome hunters!

Warning - this is long and a lesson in breeding history and why pedigree is important!

Today, again, a young breeder wanted to follow up on my suggestion for her to use Quaterback on her mare, breeding for the hunter market. Well, I can understand that younger breeders don't know all this fabulous jumping blood in the background of Quaterback, but he has some real greats both top and bottom. First, lets start with his direct sire, QUATERMAN I, bred by the Haupt Gestuet Brandenburg

Quaterman was by the Olympic dressage stallion QUANDO QUANDO (rider Ms. Oatley in 2008).

His career in sport and breeding was exemplary, beginning in 1995 as a top colt at the Vechta auction, continuing to become the 1c Premium winner at the Stallion approval and the undisputed Winner at the Stallion Performance Test with the highest possible score of 10 for character and willingness to perform, a score of 9.5 for rideability and a score of 9 for temperament, walk, trot and canter. And ever since, his success in sport and breeding has reached an impressive maximum. Highlights in sport have been participation in the Bundeschampionat finals for 5 and 6 year old dressage horses, 5th place at the World Championships in the class for 6 year old dressage horses as well as 5th place at the Nurenburger Burgpokal 2003, prior to which he won the VTV Dressage Stallion of the Year Award. With no effort at all, first places in international Grand Prix followed in 2004 and he won the World Cup B finals in Dortmund which resulted in his nomination for the Olympic Games in Athens.
Quando-Quando also made a name for himself as a maker of first class horses. More than 90% of his foals were awarded a Premium at the Oldenburg branding events in 2004. In Berlin-Brandenburg, strong moving offspring by this stallion each year were winners at Foal Championships and broodmare shows. In the Brandenburg/Sachsen breeding area alone, many State Premium mares confirm the quality that Quando-Quando passes on to his daughters. In 2004, after Quaterman and Quentchen Gluck, Quiroga was Quando-Quando's third son to be Licensed. His offspring are very popular because of their modern, noble looks, outstanding rideability and strong movements and they also have the good jumping ability his pedigree promises. All of these characteristics are impressively documented in the FN's 2004 Predicted Breeding Value statistics.

Quando-Quando was one of the "top five" dressage stallions with a breeding index of 151 points.

The dam of QUATERMAN was a mare Rauberbraut by ROCCODERO B. He is a sire of sires as is his father RONALD. Roccodero was the overwhelming winner of his Approvals and was the crowd favorite. He had many top progeny who are winners at international jumper level. He was exported to Australia. His Sire, Ronald competed in intermediate show jumping with Hans Gunther Winkler.  RONALD was sire of:  Roccodero (Champion Stallion Neumunster 1982), Saluut,(licensed by WMPN, sire of Saluut II, who earned most $ in one year as Grand Prix jumper in U.S. history), Ricardo (elite sire, Baden-Wurttemberg), and Dukaat (7 th 1994 Dressage World Championships).  Ronald was the Maternal Grandsire of Alcatraz (1988 Stallion Performance Test Winner), Libero H (show jumping World Cup winner)

Shall I go on with our lesson??? 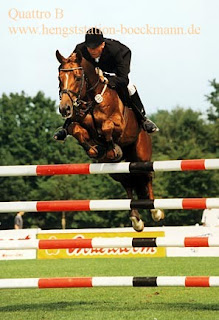 The Great Grand sire of QUATERBACK , Quattro was a Selle Francais born in 1990. He was 2nd in the Performance Test at Medingen with a high score of 130 points, scoring 128.02 in the jumping and 121.15 in dressage. In 1994, he was Reserve Champion of the Oldenburg Korung, based on his performance test and his first offspring. Quattro jumped very well in 1996 with his rider Gilbert Bockmann and they won more than twenty 1.30m courses through the summer. Quattro jumped on the international circuit successfully, including 2nd in the Grand Prix of Emsburen, Kiel and Bremen. He also was successful in Caen, Leeuwarden, Berlin, Munich and Geneva.
His first offspring show spectacular gaits and also inherited Quattro's beautiful type and free jump very well. Since 1997, Quattro has more than 10 Approved sons: Quando Quando, Quantes, Quatier latin, Quell charmeur, etc. Quattro's offspring Quando Quando, Much Ado and Quantum Tyme are famous in Grand Prix dressage. Quattro remarkably had two offspring qualified for the Olympics in Athens 2004: Quando Quando for dressage and Oliver Q for jumping !!

Quattro is a son of Qredo de Paulstra, winner of the Grand Prix of Bordeaux. Qredo is sired by the legendary Galoubet, who twice won World Cup Qualifiers and produced international jumpers such as Quick Star and Baloubet du Rouet. Grandfather Alme is even more famous with offspring such as Jalisco B and I Love You. On Qredo's mare's side, we find Furioso, father of Lutteur (gold medalist Tokyo) and Le Tyroll. On Quattro's dam's sire side, we find the important Quastor, Uriel/Nankin and Enfant Terrible.


And that is just QUATERBACK'S SIRE'S SIDE!!

The dam of QUATERBACK, Passionata, is by the Oldenburg bred and licensed BRANDENBURGER. He won his HLP in Neustadt/Dosse in 1991 (1/34) with a total score of 134.06, scoring 125.85 (3) in jumping and 138.39 (1) in dressage.
BRANDENBURGER was by the interesting Dutch bred stallion BEACH BOY by ZEUS! And out of a dam by LUCKY BOY xx. Do I really need to go into who those two greats were??? 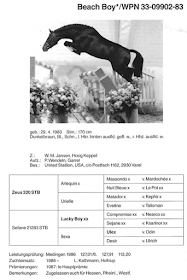 Rounding out the damline of BRANDENBURGER is the super sire ..... the best of the Ferdinand line of the Hanoverians, WENDEKREIS, one of my all time favorites for passing on willingness to work and all round athleticism. 2nd dam's sire is the TB WAIDMANNSDANK, so important in the Hanoverian breeding also.

Looking at the technique and form of BEACH BOY, you can see how the pedigree goes on in QUATERBACK to give this athleticism and hunter style to his offspring! All of these great sires have donated some of their genetics to make QUATERBACK the super neat all round sire that he is!

So! Did you enjoy your journey into Breeding History "a la Judy" ??